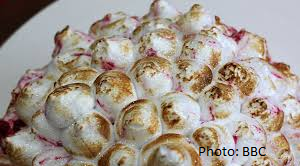 What springs to mind for most of us as the first hot rays of summer sunshine dazzle across the blue sky? Perhaps a picnic, a trip to the beach or a leisurely afternoon in a pub garden. Not for our bakers. On the hottest day of the year to date, they were under warming canvas, grappling to freeze icecream, pipe mascarpone and temper chocolate. Episode 4 was a true pressure cooker from the start.

First up in the Signature Round, self-saucing puddings. With most bakers opting for the fondant pudding, timing was everything and some pulled it off to perfection. Richard’s Black Forest puddings oozed cherries and were ‘exceptionally baked’ whilst Kate’s chocolate and salted caramel puddings were ‘bang on’. Others fared less well, with bakes described as ‘dry’ or ‘claggy’, whilst Norman was scolded for his plain presentation.

With wilting temperaments, the bakers moved onto the Technical Challenge – tiramisu cake. A precision-layered cake of coffee-soaked whisked sponge and mascarpone topped with tempered chocolate decorations, bakers needed all the time and cool preparation they could find. Both were in short supply. Although accepting of the effects of the hot day, the judges remained beady eyed, noting unsoaked sponges, mismatched layers and poor flavour distributions. Martha came out on top, whilst Norman and Diana sank to the bottom. 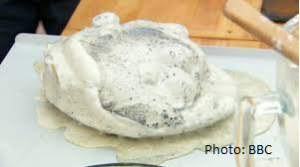 And so to the showstopper round. Baked Alaska, that combination of icecream-topped cake encased in meringue, something I’m not sure I’ve ever eaten! Richard revived his tiramisu with a layered approach, whilst I wanted to jump into the screen to taste Martha’s Key Lime Pie interpretation. Kate wowed the judges with an exquisitely piped chocolate, raspberry and pistachio number. But focus was elsewhere in the tent. Other bakers struggled in the heat and it was Iain in particular who could not get his icecream to freeze. After layering it in a liquid heap with his cake, Iain transferred his creation to another freezer across the tent, from where it was removed for 40 seconds by Diana. As confirmed by both Sue Perkins and Paul Hollywood, the time his creation was out of the freezer wasn’t enough to cause all that melting. But for Iain, it was the final straw on an overheated day. Soggy Baked Alaska firmly in the bin, he walked out the tent and was unable to present anything for judging. And for that, the judges decided he had to go. Cue outrage over a supposed sabotage and the apparent unfairness of it all.

This all felt far removed from the genteel home baking portrayed in the opening credits. And perhaps that is the crux of the issue here. In just 5 series, Bake Off has inspired ever greater feats of baking wizardry and creativeness. Four episodes in, this series has seen gold-leafed breads, fantastical pirate biscuit scenes and precision-cut individual chocolate orange cakes. The bar has been well and truly raised, and I’m in awe of anyone who enters that fabled tent and seeks to compete under the pressure. I for one am hoping that this series returns to celebrating those spectacular bakes.

So, after a showstopping showstopper round, Iain was eliminated whilst ‘Mr Consistent’ Richard walked away with his second Star Baker prize. Next up, it’s pies and tarts week. I can’t wait to see what’s in store.