Bake Off 2014 Episode 5 – In search of pastry perfection 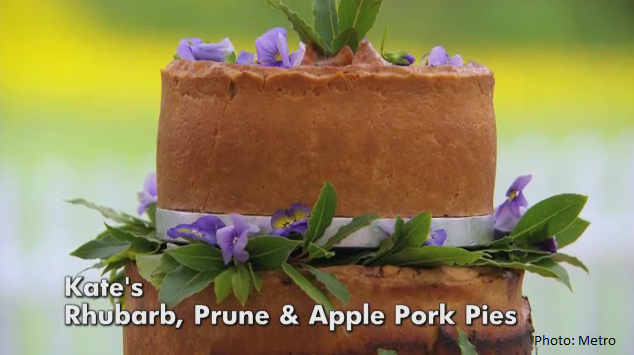 Tarts and pies week: a gem for the Bake Off innuendo spotters amongst you. But first, the sad news that Diana would no longer be participating in this series following an accident. Bakers and audience alike wished her well and will miss her capable, unflappable nature in the tent.

It promised to be another tense week, filled with plenty of chances for slip-ups. First up, custard tart time! These needed to have an even bake across the pastry case with a just-set filling; yet again, timing would be everything. Nancy branched out with chocolate pastry and passionfruit filling, whilst Luis’ juxtaposition of Tropical Manchester tart was a judges’ favourite. There were stumbles for Richard and Martha, with their flavours and bakes deemed lacking. And of course, Norman was keeping it simple. It was a dangerous move after last week’s criticisms, and the judges were hard on his classic Tart au Citron, describing it as a ‘mess’.

Then on to perfect puff pastry-wrapped poached pear pies. The challenge was basically to wrap a warm poached pear in a butter-filled rough puff pastry that liked to be kept cold. Martha was spot on, cooling her pears and achieving some layers in her carefully folded pastry. Others fared less well, notably two-Star Baker Richard, off his stride with drooping pastry and underdone pears. With an underwhelming Signature Bake too, was he in trouble?

And so to pies. Stacked pies. Pies in towers. Balanced pies. The judges wanted a minimum of three pies using a hot water crust pastry and a themed set of fillings for the Showstopper Challenge. It was an unusual request and resulted in some curious flavour combinations, including sweet pies stacked with meat pies. Luis went above and beyond, making four pies themed around the seasons, whilst Chetna regained her title as ‘flavour queen’. Nancy gained credit for hand-raising her pastry and Richard sought to redeem himself with a glorious steak and ale pie. 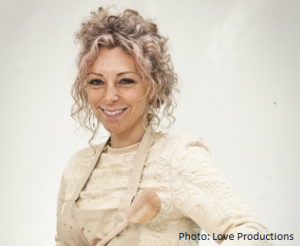 But it was Kate that shone through, impressing the judges with her ‘great looking’ Rhubard, Prune and Pork pie. A well-earned Star Baker for a baker who’s been going from strength to strength. Alas, the tent will no longer be filled with a lilting Scottish burr reciting Burns, teaching us semaphore and going ‘exotic’ with pesto. Norman’s lavender meringue atop his sweet pie was a step too far for the judges, and he was eliminated this week. You’ll be missed Norman!

Next up, it’s European bakes galore. See you then!