The Great British Bake Off is back! 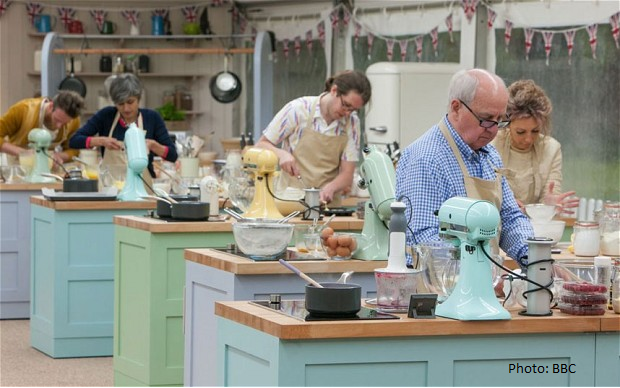 On your marks, get set, BAKE! Yes, The Great British Bake Off is back, and what a start to Series 5 it was. There were ambitious flavours, lucky spoons and gadgets a go-go, not to mention 432 miniature showstopper bakes. It’s time to roll up your sleeves, sit on your sofa and enjoy the show!

If the format seemed comfortingly familiar, that’s because it was, with the Signature Bake, Technical Challenge and Showstopper. Mel and Sue were back with their innuendo-laden best, soon up to old tricks squirreling away Diana’s chocolate mousse and teasing Paul mercilessly. But the GBBO bakers brought their own creativity and ideas to the Bake Off challenges ahead. I’m always impressed by the range of flavours and different recipe interpretations offered up in the tent. And it’s great inspiration! Hot tip from Episode 1 was the intricate piped designs on the Swiss Roll tins – freeze them and bake before adding in the main sponge and voila! A beautifully decorated roll.

The judging remained exact and to a high standard. The Berry/Hollywood double act continued, with gentle encouragement and tips to improve from Mary, and blunt, sometimes grumpy, statements from Paul. Flavour, presentation and bake were key. An unusual combination involving aniseed worked out well for Luis. Norman showcased a handcrafted Swiss Roll stand. And, as ever, the judges found some bakes wanting – a sponge too dry, presentation too clumsy, flavours not shining through.

The bakers themselves were an eclectic and likeable bunch. Much has been made of having both the oldest (Diana) and youngest (Martha) GBBO bakers to date on Series 5. But there also seemed to be a new level of gadgetry in the Bake Off tent. Alongside the pastel colours, bunting and ceramic mixing bowls were cakes served with syrup-filled pipettes, a mini-guillotine for precision cutting and the return of the ruler. As someone who likes to keep it simple in the kitchen, I’m undecided on all that gadgetry, but I can’t deny it added some culinary theatre and produced some stunning results – Nancy’s Jaffa Cakes a case in point.

And so Series 5 started almost as expected. Nancy was a well-deserved Star Baker. Commiserations and a Mel-and-Sue sandwich hug went to Claire. There were some early ‘ones-to-watch’ – Richard the builder told he was ‘in the wrong job’ and 17-year-old Martha was cool under pressure to come second in the Technical Challenge and earn high praise for her bakes. So here’s to another enthralling, hectic, bake-filled GBBO – hope you enjoy!

What did you think of the start of Series 5? Any favourite contestants yet? Let me know your comments below!