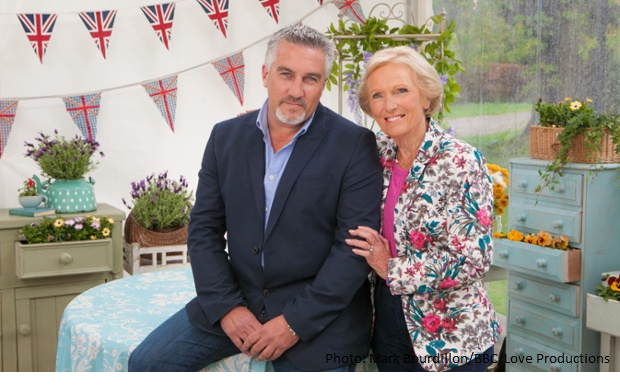 Shaking hands. Battles with gravity. And a longing for some edible glue. That’s right, Bake Off week two and there’s a 3D showstopper already. Throw in that it was biscuit week and suddenly the tent was awash with chocolate bourbons, delicate tuiles, well-rolled pinwheels and crunchy gingerbreads in their hundreds. Could those who shone last week (Nancy, Martha, Richard) continue on their roll, and who would be leaving the tent today?

First up in the signature bake and it was savoury biscuits to go with cheese. Martha claimed an early advantage, spending her working weekend staring at the supermarket cheese counter. Around the tent, inspiring ingredients and flavour combinations from all corners of the globe surfaced, from Jordan’s Mexican-inspired sourdough chilli cheese offering to Chetna’s fenugreek and carom seed thins. Not to mention the myriad tips and techniques on show – and gadgets were back! No fork for Nancy, she had a specially-commissioned ‘biscuit Iron Maiden’ to prick the dough before baking. But, for all the gadgets and gizmos, it was Norman, with his plain and simple farthing biscuits that won praise from the judges.

A brief, and fascinating, history of the (biscuit) ice-cream cone was a welcome interlude. I love these bits! Though the thought of using that shared penny lick glass did flip my stomach a little.

Then it was on to the Technical Challenge. Florentines! Sticky, sweet, teeth-gluing discs of scrumptiousness. An absolute Christmas (it’s too early to mention it) must here at Bakehouse HQ. Quite a bit to challenge – don’t burn your caramel, give the biscuits space to spread as they bake and not to mention getting rich, glossy, well-set tempered chocolate intricately drizzled over the flat side of each one. Without the full recipe, and under pressure, it’s easy to see why the bakers start to question every last step they make. Ultimately, Richard rose to the top, pencil firmly clamped behind his ear.

Finally, the 3D showstopper. It’s a tough test this early in the series – think back to James Morton’s gingerbread barn or Frances Quinn’s toppling tower. Judging resulted in the first Mary Berry Death Stare, as Enwezor confessed to using shop-bought fondant (ummm, don’t we all?!) and his tower of biscuits was underbaked. It placed him squarely in the danger zone. Luis, with his graphic design background, produced a stunning piping display with his George and the Dragon spectacular. But he was pipped to the post by construction king Richard, his creation awash with pirates, sea monsters and even a cheeky mermaid. I really want to try 3D interlocking biscuit creations now!

A well-deserved Star Baker to Richard and obligatory group hug consolation to Enwezor. A nervous moment for Norman, whose simple showstopper style failed to wow the judges, but he lived to semaphore another week. Next week – it’s bread week! I couldn’t be more excited!

How did you find Episode Two? Are you inspired to try out a recipe or two yourself this weekend? Share your thoughts below, I love to hear from you!