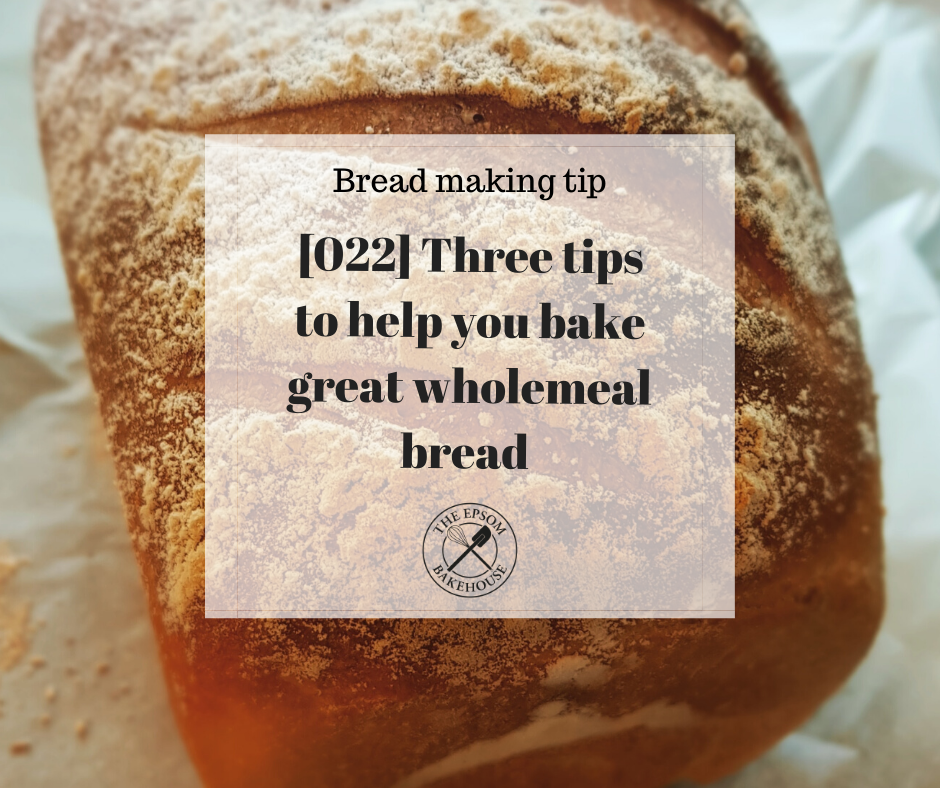 Perhaps you’ve mastered your white flour sandwich loaf and are keen to start baking with other flours. Or did you try baking a wholemeal loaf only to find the result dense and quite flat? If so, watch the video below for my top three tips to help you bake a great wholemeal loaf at home. You can also read more in the blog below – just scroll down.

What is wholemeal flour?

Putting it simply, wholemeal flour is formed when the whole grain – of wheat, barley, rye or whatever cereal grain being used – is crushed into flour.

White flour is formed when the starchy interior of a grain – the endosperm – is crushed or milled into flour. To form wholemeal, either the bran from the outside of the grain is added back in to white flour, or the whole grain is crushed up together.

Wholemeal flour can often appear coarser in texture than white flour. It will be creamy in colour and be flecked with brown pieces of bran. Most of the nutritional value of grain is found in the bran too.

Any flour that has more bran in it – brown or wholemeal flour – will absorb more water. In fact, in the video above, I demonstrate with a dough made with water at 80% of the flour weight. So for every 100g of flour used, I’m adding in 80g water.

That’s quite a high percentage of water for any bread dough. With white flour, this would produce a very sticky, hard to handle dough.

But as you can see in the video, the dough is relatively firm and easy to handle. This is because the bran in the wholemeal flour has soaked up lots more water.

So, if you want to make a wholemeal loaf, don’t just use the white flour recipe you used before and substitute in wholemeal flour for white flour. The dough will turn out very dry and tight – and this is the first step to baking a brick, not a loaf!

Tip 2: Use a pre-soak method

Don’t worry, this has nothing to do with your laundry!

A pre-soak is simply mixing the flour and water from your wholemeal recipe and leaving them to soak for at least an hour. You could leave the mixture overnight.

As already discussed, the bran in wholemeal flour absorbs a lot more water.

In addition, as flour absorbs water, gluten starts to form in the dough.

Gluten is a stretchy, elastic protein that provides support as your dough rises. The bran in wholemeal flour can cut through the forming gluten network, removing some of the support for the dough and resulting in a flatter dough.

Using a pre-soak gives time for the gluten network to form without any mixing with and interference from the bran. Once completed, you add in the rest of the ingredients and continue to make your dough.

Tip 3: Add some sweetness to your dough

I always say that you don’t need to add sugar to your basic breads – and this is an optional tip too!

But adding a tablespoon or so of brown sugar or honey to a wholemeal loaf can help balance out the flavour of the flour. It will also give the yeast a boost as it rises your loaf. So why not try it in your next wholemeal loaf?

Used any tips from this blog to bake great bread at home? Do let me know in the comments.

You can check out more breadmaking recipes, hints and tips on the blog.

Want to learn more about baking your own great bread at home?

Tired of turning out loaves that resemble bricks and instead want to know the secrets to light, fluffy bread? Want to see the steps I take to bake great bread in my home kitchen?

If you’re new to bread baking or just want to sharpen your skills, you can learn to bake great bread on my new online bread making course, launching soon.

Want to be the first to know more? Join the waitlist here and you wil be!